I definitely didn’t meet all my reading resolutions this year, but it’s still been a good year.

Hopefully everyone out there are celebrating the season in the way they like best. 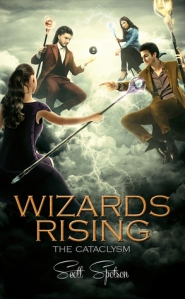 As the world is on the brink of World War Three, suddenly wizards appear, destroying all of the world’s nuclear weapons, and taking control of the world. In Wizards Rising: The Cataclysm, four of them take control of North America for only three years (or so they say). A social worker, Amanda, wins the position of Supreme Liaison between the ordinary people and the wizards, and finds herself torn in different directs as she starts to learn more about the wizards and their society and what they are really looking to do with the world.

A nice part of the novel is that every time I started to think ‘that’s a little ridiculous’, the author threw in a little twist that made that ridiculous element make perfect sense. The wizards are supremely powerful, but seem immature, but there is a reason for that. They place arbitrary limits on the age of people applying to the Supreme Liaison position, and fill it through a process that seems more appropriate to a reality television show, but there’s a reason for that.

I also appreciated the fact that there was no quick and easy fix at the end.

While not a perfect read (I wanted to know more about what was happening outside of North America, as well as more about the Wizarding culture), I do hope there will be a sequel, since the world has been completely altered in the end, and I’d like to see what happens next. This book also goes to show that self-published doesn’t mean bad. Sometimes it just means that the subject matter doesn’t quite fit into the mainstream publishing houses.

In a lot of ways, Bombardier Abroad: Patterns of Dispossession does not live up to the title. Maybe putting them the other way around would have been better. The majority of the book is about three cases of dispossession, and how the Bombardier company ties in. For those who don’t know, Bombardier is a Canadian company that creates transportation products of various types (rail, air, sea), and in the last year drew the ire of American company Boeing, leading to Trump imposing massive tariffs.

First is the Chinese occupation of Tibet, and the ways that Han Chinese are displacing the native Tibetans. This chapter focuses on the building of a train line to Tibet, which is being used to bring in Han Chinese tourists and businesses, as well as troops to prevent unrest, and transport out the product of Chinese-owned and controlled mines. But the only tie-in for Bombardier is that they sold a number of train cars to China for the line. The main objection was that Bombardier didn’t cut off the chance of any business in China by refusing to make train cars for them.

The second chapter covers a South African high-speed rail line that Bombardier was a part of a coalition of companies that bid on the project. In this case, the author doesn’t really make the case that the railway was completely bad, just that it doesn’t do anything for poor people who have transportation issues. The railway is designed to service business classes moving between large cities without any service to poorer communities that need better transportation more. While I don’t disagree that the money is not well aimed, I don’t see it as quite so immoral as the author implies for Bombardier to be involved.

The third chapter deals with another railway line in Israel. Now this project had heavier moral implications, since there were moves to appropriate land from Palestinians for the line between Jerusalem and Tel Aviv. But while the project is problematic, Bombardier has little involvement. They sold some train cars to Israel, and not for the first time, and the author implies that Bombardier should have take the high road, and again refuse to be even tangentially involved.

Basically, the summation is that a company with shareholders should cut off avenues of business. Or that since Bombardier has received funds from the Canadian government, the government should order them not to do business (non-military) in countries that Canada has reasonably congenial relationships with. Neither option sounds terribly realistic. Perhaps one could say that Bombardier should have pushed the South Africa project to include more options for future expansion that would benefit the poorly serviced communities.

I sympathised with the urge, but it really didn’t make much sense. I think the author would have been better served by writing a book about dispossession, perhaps using railway lines as a common thread, but the focus on one company weakened some of the point.