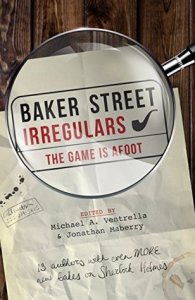 For those who are unfamiliar with fanfiction, ‘little black dress’ is a term that refers to a fandom where either the characters can be translated into a variety of scenarios, or a scenario that can be applied to any number of fandoms (the scenario of the television show The Sentinel from the 90s continues to be applied to all sorts of fandoms and characters from other shows, and the next round of Rough Trade next month is going to be a Sentinel one. It’s being applied to everything from Harry Potter to The Avengers to Star Trek, and a lot of weird choices in between).

Sherlock Holmes is a concept that has been translated in all sorts of ways, mainly by moving the characters to different environments. The most recent examples are the BBC Sherlock, and CBS’s Elementary. Both take the characters and move them to contemporary times, one of them also doing a gender switch on Dr Watson. I did find it ironic that for the show Sherlock, they didn’t even have to change Watson’s background; he is still a military doctor injured in Afghanistan.

And here comes Baker Street Irregulars: The Game is Afoot, a collection that makes me want to run out and buy the first one.

This collection delightfully takes Holmes and Watson into all sorts of directions. There’s the SF stories, the fantasy stories, the contemporary stories, and the historical stories. Want to see Holmes go to the other side as a killer? You’re covered. Want to see them as coffee shop owners in Australia (yes, rather specific)? It’s there. Want a Sherlock who *knows* he’s a fictional character? You’ve got it. Female versions of both characters are there. Or Sherlock and Watson as home AIs? Yep.

There’s even a story where they are married, as members of an alien race that have no gender until they want to procreate, and are fighting a Moriarty who is from a shape-shifting race.

When I look back, I can’t think of a single story that disappointed me. I highly recommend this collection to any Holmes fans. 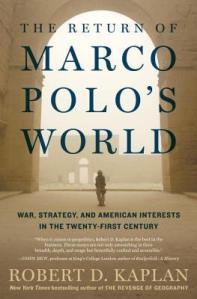 I’ve been reading more and more non-fiction lately, and current affairs is an area where I am trying to expand my knowledge, so when I saw this book on NetGalley, I put in my request immediately, and was happy to get a change to read it.

Still, The Return of Marco Polo’s World was a book I felt a little conflicted by.

First off, the essays that made up the middle of the book, originally published in The Atlantic, are based around a number of subjects. There are articles about various thinkers and advisers who tried to guide US foreign policy in a very pragmatic direction. Following high morals just does not work, since what works in North America and Europe isn’t necessarily going to work in other parts of the work, and trying to force Western-style democracy on the middle east or Asia is likely to cause even more chaos than is already there. The author, and the subjects of his essays, push a more pragmatic stance of looking at possible interventions and making choices based on whether it will be good for the security of the US, not whether it is the ‘moral’ thing to do.

The essays on the morass of the middle-east follow similar thought paths — only step in if it will, in some way, make things better for the US. And I am not foolish enough to claim that what is good for the US is not good for Canada.

It’s a somewhat cynical, and very pragmatic, look at foreign policy, and where its focus should be. As someone who is pretty left-wing (in a country that is also very left-wing), I found myself heavily agreeing with him there. I’m left-wing at home, but feel that we should let other countries work out their problems. Provide aid where they need it, but not try to police them. Iraq under Hussein was not good, but is it really any better now? Or further back, the US interfered in Afghanistan in the cold war days, and while they knocked the USSR out of the country, the result was the Taliban, and later Al-Qaeda, filling the power vacuum when the US declared job done and walked away.

Unfortunately, the opening and closing pieces, written (or heavily revised) for the book are less successful. The opening attempts to tie Marco Polo’s era into the present, travelling along the corridor that China wants to develop with high-speed travel as a modern version of the Silk Road. To be honest, that piece dragged, and the sentence structure was so tortured that I had to keep rereading paragraphs to make sure of what he was saying. As well, he periodically threw in words that I had to look up. I consider myself well-read with a large vocabulary, but in several places I came across words that I couldn’t even figure out from the context. Thankfully, my Kobo has a word lookup dictionary.

The closing piece, on China, was shorter, but again went for the overdone language. It made me wish that those two pieces had the same editor(s) as the magazine essays.

In the end, the book’s contents had little to do with the title, although the subtitle was a more clear description of the contents. I just wished that it had been billed more as an essay collection than trying to force in a theme that only really showed up in the opening that was, to me, superfluous.

But looking at only the magazine essays, this is a book well worth reading.